A Lot of HOT AIR

You may well have thought you had seen the last of me, as it's months since I posted. I was ill for some time which kept me out of circulation. Then we came to stay with one of our granddaughters in Australia - for three months.
Those that know me, to be play-aholic, will understand that three months inactivity would turn me into a twitching wreck. However, I became ill for the first 7 weeks in Australia, and couldn't do much. I then tried painting but with my two little great-grandsons as my  shadow, I felt discretion was the better part of valour (valor).
This left writing. I have managed to edit my novel/thriller The Othila Paradigm .....finally. I also completed my autobiography.
I then decided to do a bit of writing about a couple of my 'heroes,' and I post below the piece I have written about them.


It's rather a long piece, please don't feel compelled to read it - my interests aren't to everyone's taste.

Although the general advice for new writers seems consistent – don't give up, keep writing – I am the only person, as far as I know, who cites James Tyler as the prime example of the writer who kept the faith and just kept on writing. His stubborn persistence has resulted in him now being described as: '...an extraordinary genius who was a fair specimen of a class of literary men who lived in the latter part of the eighteenth century'.
Whenever I mention my hero's name, people ask, 'Who the heck was James Tyler?' 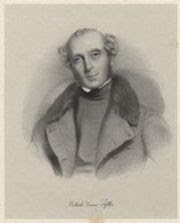 'He was editor, and largely the compiler, of the second and third editions of The Encyclopaedia Britannica,' I explain.
'So what?' they invariably reply. At which point, if they're not too rude about him, I give them another clue.
'He was the first person ever to fly in Britain'.
'Really, so why haven't we heard of him?' they ask; which seems a fair enough question I suppose, given the magnitude of the achievement.
I suggest to them that Tytler owes his lack of celebrity, to his knack of seizing failure out of the jaws of success. For example, when he became the first man to fly in Britain, hardly anyone noticed – and those that did couldn't stop giggling and holding their noses.
Born the son of a Minister from Brechin, in Scotland, James Tytler became an apprentice to a surgeon in Forfar. He became a surgeon and in this new capacity, he made two voyages on a Greenland whaler, which enabled him to finance a full medical education at Edinburgh University.
He was unfortunate insofar as, after graduating, he had insufficient capital to sustain him through the time needed to establish a medical practice. Instead he became a pharmacist and to set up his own 'Chemist shop'.
Despite being a fine chemist, he once again failed and, to escape his creditors, he fled to Newcastle, where he set up a scientific laboratory which alas, was soon bankrupt.

I stumbled upon Tytler in 1984, when I received a commission from the Royal Air Force Museum at Hendon, to design ten philatelic 'First Day Covers' to commemorate the bicentenary of flight. Besides designing the envelope and cancellation stamps, 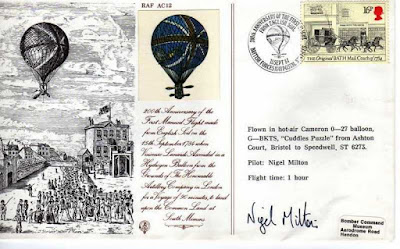 I had to produce a five-hundred-word précis on each of the ten Aeronautical events. These were reproduced onto postcards and inserted into the appropriate envelopes.
With a whole museum and its resources at my disposal, the research was fascinating. I began living with characters such as: the Montgolfier brothers, Vincenzo Lunardi, the Frenchman Jean-Pierre Blanchard and the American John Jeffries. They and many others filled every moment of every exciting day. So many fantastic stories. 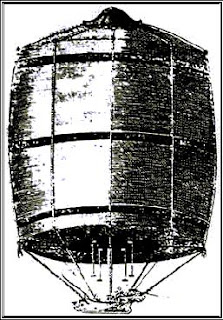 Yet of all these larger than life characters, Tytler, for sheer tenacity, impressed me the most. He had single-handedly designed and built a hot air balloon which was little more than a large sailcloth bag inside a wicker-basket, beneath which he suspended a wooden platform that was just large enough to accommodate him and a stove.
Came the day, 17th August 1784, the crowds turned out to watch his first flight, but alas, try as he might, the hot air generated by the stove was insufficient to get the balloon, and him, off the ground. All he received for his efforts were jeers of derision, which wasn't as bad as the reception the French balloonist Morell had received in London when his launch failed: the crowd tore his balloon to pieces and he ended in hospital.
Undaunted, my hero varnished the porous sailcloth bag, to stop the hot air escaping, and on the 25th August, he tried again. The crowds soon lost interest and wandered away, but fortunately the reporter from the London Chronicle, who had travelled all the way to Edinburgh and who had managed to sober up for the event, remained to witness Tytler, in a fit of temper, kick the stove from the platform. The removal of the heavy stove caused two things to happen. Firstly, it caused the balloon, with Tyler hanging on for his life, to shoot three hundred feet into the air and drift away on the breeze, and secondly, caused the reporter to sympathetically write:

'Early on the morning of 25th August, the bold Adventurer took his first Aerial Flight. Mr Tytler went up without his Furnace this morning; when it is added he will be able to fuel the Balloon with Inflammable Air and continue his Aerial Excursions as he chooses.'

True to form, on the verge of fame and with the whole Nation beginning to take an interest, his next flight from Comely Gardens in Edinburgh was a disaster. The balloon rose, carrying the 'bold Adventurer' up into the sky, whereupon it drifted three miles before crashing deep into a ‘sewage-pit’ at Restalrig, destroying the balloon, the furnace and his flying career. Efforts, I might suggest, that were not at the time, to be sniffed at.
Throughout his failures, Tytler never gave up and continued to write. At one time he moved to the village of Duddingston, where he and his long-suffering family lodged with a washerwoman, whose inverted wash-tub he used as the desk from which he industriously expanded the Encyclopaedia Britannica from three to ten volumes. Each day he sent a parcel of copy to his employers in Edinburgh: the ‘booksellers' Messer Bell and McFarquhar. The proceeds from which he was just able to provide food for him and his family and the odd wee dram (whisky)  for himself.
Although seldom sober, Tytler was a very practical sort of writer insofar as he took self-publishing seriously. After his wife and family had, not surprisingly, deserted him, he moved into the Debtors Sanctuary in Holyrood House
where he built his own printing press, from which he, unsuccessfully, produced the Weekly Review, The Gentleman's and Lady's Magazine and the first volume of The British Universal History.
Tytler also wrote poetry, and at least two popular songs: I hae laid a Herring in Saut, and, The Bonnie Brucket Lassie. The songs were of such a quality as to attract the attention of Robert Burns, who commented on how surprised he was to find that such clever ballads should come from such '... a poor drunken devil, with a sky-light hat, knee breeches and hardly a shoe to his feet...'.
The ill-fortune and poverty of Tytler, it is claimed, ' ...were attributable to his imprudence and intemperate habits'. Despite this, Tytler the writer, was always in demand, not least for his great intellect, endless store of knowledge and skill with the pen. On one occasion he was sought out to write a complex piece of historic work. He was finally located in, '... one of those elevated apartments called garrats ...', where he lay drunk in bed. They sat him up, brought pen and paper and told him what was required, whereupon in a very short time: '...he produced about a page and a half of letter-press, which answered the end completely, as if by the most mature deliberation ...'.
In 1792, Tytler became the 'ghost writer' of A System of Surgery, in three volumes, for a prominent Edinburgh Surgeon. In the same year completing a principle work, The Edinburgh Geographical Grammar – which after publication by a Mr Kincaid, ‘…ran to a number of editions...’. He also made time to produce a periodical, The Edinburgh Intelligencer. There seemed no evidence of writer's block!
His fortune seemed made, but alas, he had joined the 'Friends of the People', a society in pursuit of parliamentary reform, for whom he produced a political pamphlet, which was deemed to be seditious. He went on the run from the authorities, hiding for a while in the house of a friend, before escaping via Ireland to America – never to return.
But what of his legacy? What of the work he left behind? Ironically, his early work as a chemist - attempting to manufacture magnesia – went on to make a fortune for his former partner and family. Also, after his departure, the Encyclopaedia Britannica, made a massive £40,000, and his works of 1792 brought fame and fortune to the Edinburgh surgeon and Mr Kincaid, respectively.

Yet his exploits as the first British Aeronaut where overshadowed by Vincenzo Lunardi, who as the 'Daredevil Aeronaut' and the first to fly in England, carried out many sensational flights in Scotland. His brightly striped silk Hydrogen balloon, not only encouraged a fad in ballooning, but inspired ladies' fashions in skirts and hats. 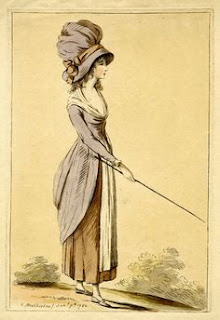 The "Lunardi bonnet" is mentioned in the poem, To a Louse, by Robert Burns.
It should be noted that Tyler also was a great admirer of Lunardi, and in 1806 – the year Tyler and Lunardi both died - wrote a very long Ode to Lunardi, the first two lines of which, in my opinion, seem to fit Tyler exactly:

Lost are my wishes, Lost is all my care,
And all my projects flutter in the air.

For those who hate untidy endings: James Tyler, re-emerged in Salem, Massachusetts, where he became a very successful editor of a newspaper from 1793 until his unfortunate death in 1806, when, whilst walking home from work, he fell into a drunken stupor and drown in a pond.

Posted by Gatepost productions at 22:07 7 comments: