People first noticed that I could draw in 1980. I had drawn three Rhine Castles and a Dutch Windmill and the framed prints were sold from a shop in Germany, purely for charity.

Today, my sister-in-law called to say she had found an old newspaper article about these four pictures, and there was a photograph of me, the pictures and the lady who ran the shop. I can't wait to see the newspaper as I have no recollection of it ... ... if I don't look too weird, I'll post it here for a giggle.

That got me thinking. My first 'non-technical' drawing was in 1979 - of 'Cotehele House' in Cornwall. Pat put it into a magazine competition and it ended up as the front cover of the magazine. Such a silly turn of events ... I was so embarrassed. So the next four pictures I drew were the ones above, for charity.

This set of pictures were so 'static' and amateurish that I can never understood why they sold.

Then I drew my fifth ever drawing, 'Reckteren Castle' near Dalfsen in Holland.

Pat and I loved Holland, we lived 3 miles from its border. Anyway... drawing this picture, Dalfsen we call it for short, was the first time I felt 'the pen takeover'.

Let's Wrap The Whole Thing Up!

What I'm after here is your opinions on packaging artwork for shipping.

Setting The Scene In the past, and currently, I sell direct to the clients three basic products:

If I have to ship an Original, I (wooden) crate it myself - no problem (but too expensive for prints) 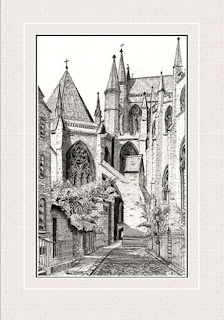 Selling on line becomes a problem for MBB

Here (left) is an MBB, 18 inches x 15 inches, which has to laid flat in its packaging. This packaging must be tough to withstand bending in transit. 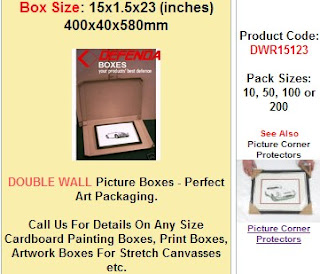 The packaging I have bought (left) is expensive, and I'm not sure its up to the job. So the problem is pricing oneself off the market 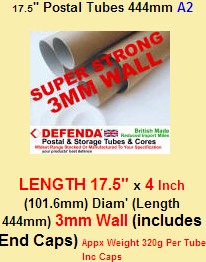 One solution is to sell the print without mat and backing board' simply roll it, and place it in a Tube.

The advantages are that the print can be sold quite cheaply, and shipped safely. Even so shipping cost will be high in relation to the cost of the print

The disadvantage, is presentation ... Presentation is ALL to me. If the clients don't think they have had a good deal, then I have failed. I prefer them to think that I am undercharging - which in truth I am, as I'm not making a living from it.

I don't want you to divulge your 'trade secrets', but would welcome your opinions. Thanks in advance, everyone ... When I write my book. "All you ever wanted to know about packaging artwork and were afraid to ask," I shall mention you all in the acknowledgements :0)

Posted by Gatepost productions at 09:15 15 comments:

I'm not trying to sell you pictures, but the gallery I'm in the process of building feels like the ghost ship, Marie Celeste. 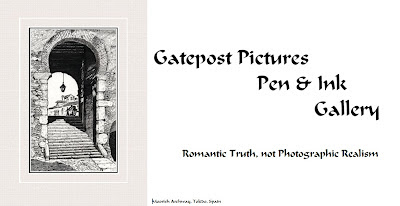 
click http://gatepostpenandink.blogspot.co.uk/ to enter :0)
Posted by Gatepost productions at 06:09 34 comments:

Time to Spin You a Yarn.

Sherry over on Conservatively Bohemian is, amongst many other things, a weaver. She said that she thought that she might try her hand with a spinning wheel. I replied that I had made a working spinning wheel, but it had never been used.

Here it is. I said to her that I would do a post about the parts of a spinning wheel,  as they fascinate me. But first let me set the scene.

In Britain an old fashioned name for an unmarried woman was, Spinster. They reckon that years ago these women were usually quite young and would stay at home to look after the children.  They also did the spinning. They would sit spinning the yarn on the wheel, as they 'spun yarns' (told stories) to the children.

When she married the spinster would change her family (maiden) name to her husband's family name. However, another name for 'maiden-name' was 'Distaff'. At the top of the spinning wheel is a post called the Distaff.

Just below it, but hard to see from this angle is, the 'Mother-of-all' it is a thick horizontal cylinder of mahogany  (you can see the end of it on the extreme right). From it project the  two 'maidens' which between them hold the 'spinner.'


This all sounds a little sexist ... so let me introduce some fellows, to bring some equality into the story. If you look back at the first picture, you may see that I made the actual wheel part from joining 8 pieces of wood - see how the grain varies? Well these are the 8 'Felloes' (pronounced the same as Fellows). But that is not all the males have to do, for, joining the foot treadle to the brass piece at the centre of the wheel, is, 'The Footman'.

If you look back at the first picture you can see that the footman passes though a slot I cut in the 'stand' and is attached to the treadle by leather thongs!

Hope you didn't find this too boring.
Posted by Gatepost productions at 12:30 29 comments:

My lovely granddaughter bought us the best tickets in the house for us to see ... 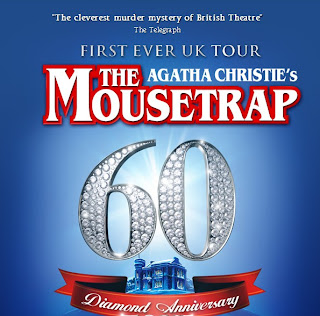 ... this is the world's longest running stage-show, which started in 1952, and is showing in Saint Martin's Theatre, London . It was totally brilliant.


We travelled down to London on the train - first time I've been on a train for a very long time. She'd also bought us a very nice hotel room near Regent's Park. This was a combined Birthday - and Wedding Anniversary present, for this week we have been married 53 years, and our birthdays were last week. I am 3 days older than Pat. 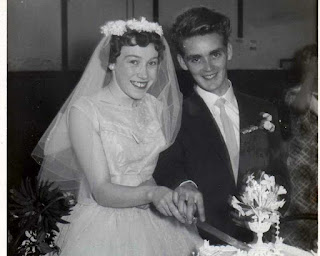 She was the red-haired (and freckled-faced) actress - she'd already won the British Public Speaking Championship three years running, and gone down a wow as Katherine, in The Taming of the Shrew.... with a voice, critics said was, "... like cut-glass crystal"...
...........before I dragged her down to my level :0).

I was the boy from the wrong side of the tracks, a shipwright and recently qualified draughtsman. Her family were in despair and our friends declared us mad, "These tearaway's  won't last 10 minutes." Contrary to belief, we gave up everything, and decided that 'family' would be the centre of our lives.

We have never deviated from our original plan in which the central role would be the family-manager and the secondary  occupation would be the provider. To this end I somehow became a 'fly-boy' and spent the next 25 years flying around the world ... because it paid well! Pat brought up the four children on the proceeds.

When the kids had grown up and left home, 'we' gave up aviation and 'we' became an artist... then a project manager in Industry... then a Systems manager promoted divisional systems manager. Next a manufacturing director. Finally a life in academia in Criminology, and later a writer of thrillers and poetry.

The grandchildren, all girls, moved in with us and it started all over again! They've all left now, the last quite recently.

Over the 53 years, we have moved home 24 times, lived in many countries and it wasn't always easy sailing. We lived life at a break neck speed but we have had so much fun along the way.

Now 'we' are an artist once more ... this blog records the route back into art, which started in February 2012. For those who wonder why we call the blog, "Gatepost Pictures": 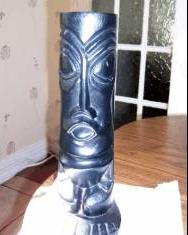 When Pat was 24, she drove the car through the gateway into the driveway .....the gate was shut at the time! I carved the broken gatepost into Maka Tiki, the Hawaiian God who looks after families. We called it a 'Gatepost Production.' From which emerged Gatepost Pictures!

Posted by Gatepost productions at 11:47 20 comments:

So we went to show the pictures today.  The product is high quality prints professionally mounted/backed and bagged in three sizes (Large -original size, Medium and small)

Everyone loved them. The ones that attracted the most attention were, Bellona, Cloisters and Schloss Neuschwanstein....... However!!!........ 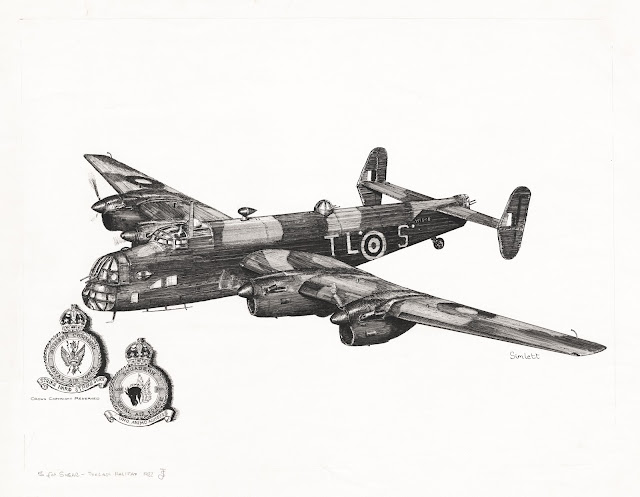 However ... the one that sold like hot cakes was .... 'S for Sugar' ... I only had prints taken of it on a last minute impulse, because Pat and Giselle reckoned it would interest the males. In the event, they were all bought by women.


Trying to second guess the market is a non-brainer. The last time, we sold out of Poets Corner, this time it was all but ignored.


One more show in October and then we are booked solidly in the run up to Christmas.

Posted by Gatepost productions at 08:56 40 comments:

Meanwhile ... Back in Germany.

I need to step back from art for a few weeks ... the final assignment needs full concentration. Then I'm finished with academia forever(ish).

But rather than lose touch I will repost some of my pictures that were really sloppy first time around. I've got some of my stuff from the Printers: I can access his computer (officially). I get it as a TIF file which I convert to a jpg

Here is the North Portal of Cologne Cathedral.


CLICK ON IMAGES FOR A MUCH BETTER SIZE THAN USUAL

They look a lot cleaner than the last lot I showed you:0))


We have a show on Sunday, where I will be launching prints of the above castle (Neuschwanstein), Cloisters and Bellona in three sizes. I have taken your advice and typed a handout explaining the history/background/points of interest about each picture.
Posted by Gatepost productions at 13:52 14 comments: