Life has been very hectic, both inside and outside of art. It has been 05-30 starts and 01-00 finishes for weeks now.

We have had two shows. The first one got torpedoed by the advertising people getting the wrong day. It was Thursday and they advertised Saturday. Nevertheless we were moderately successful. The second show was last Thursday and took place in a blizzard - freezing conditions with roads closing by the minute. People stayed away in their thousands, but we ended up in profit, somehow!

The final show is next Thursday and they are saying it will coincide with the arrival of the "Beast from the East" ... snowstorms and freezing conditions straight off the Russian Steppes! ......

.....Pat and I continue undaunted!

We are doing this for fun rather than for the money, and we are meeting so many exciting people. I'm not normally the talker, but so many people want to discuss my work; I'm amazed at their interest.

I've had three cards produced from my artwork (Cloisters, the Balloon and the German castle) by Fine Art America - I'm really pleased at their high quality/cheapness/and short shipping times. It's worth putting your stuff on there, not only to sell on-line, but also to buy (at cost price) the cards from them and then sell them on in the real world.  I bought 75 cards as an experiment, and they sell at a good profit margin. People don't always want 'pictures' but can afford a few cards!


And now we come to Saint Andrew's Cathedral in WELLS, Somerset. It was started in 1191 by Bishop Reginald de Bohun. It is considered to be a relatively modest cathedral by the English standards of the day. It is best known for its cruciform buttress arches (built in 1338) 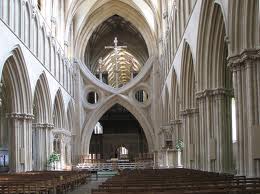 HOWEVER ... by moving the camera around, many unnoticed angles and images appear, and from those I drew this:

As you can see, Priscilla, is looking at a stained glass window. For details of the window I am indebted to a kind person who writes a wonderful blog: 'A Clerk of Oxford'. She allowed me to use her photograph of the windows of  kings.
Unfortunately I can't do the photograph justice,  for although it is a very large picture, by pen and ink standards, it is not big enough to show off the fantastic stained glass.

I would also like to thank our Judy, from Holland (everyone's favourite) for showing me how to put the copyright watermark on my drawings,
Posted by Gatepost productions at 09:55