I was asked the other day why I had drawn a loom? The short answer was, I drew it for a couple who lived in Somerset.


There is a longer version though, and here it is ...and yes there is a twist!

To set the scene, I have to tell you that my father was the outcast of the family. I don’t know why, but the outcome was that I never knew anyone at all in the family beyond my parents and siblings. To further isolate us, the family were all in Wales, in the West of the UK, and we lived in Kent in the South East. We will return to this later.

I had always been fascinated with spinning wheels, and so I decided to make one out mahogany.  It is a fully working model, but never been used, I was never interested in using it (I’m also the boat builder who is not interested in sailing!).  About this time, my wife, Pat, was given a brand new sewing machine with an instruction manual. She is not a person who makes things so I thought I would work out how it operated. Within the year I was making clothes for all the family. I made everything from denim jeans for the three boys’ dresses for my daughter and evening dresses for Pat ... I loved it. I got a lot of teasing from male friends, but as I’m pretty good at blacksmithing as well I didn’t have to prove anything. 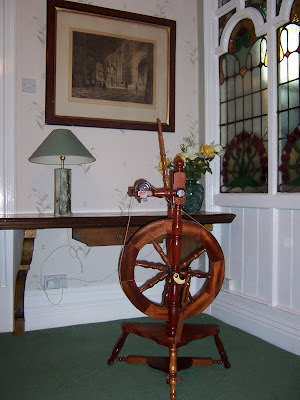 Fast forward thirty years or so: I’m running a factory in Weston-super-Mare. One half of the factory is space-age technology and the other half is cottage industry. Imagine the scene at the cottage industry department, where we had a very large order to finish, and rows of ladies sat at sewing machines working all hours trying to hit the deadline. However, ‘flu had depleted their ranks and they were struggling.

Leaving Riitta Tretjakov my (Finnish)  deputy to run things, I rolled up my sleeves and reported for duty to the head machinist. “Can you use a sewing machine?” she asked, trying not to laugh at the boss.
“A bit,” I replied.
“Ah well...”

I’m not saying all the girls were feminists, but they didn’t hold males in very high regard. There was silence from the grinning girls as I was led to the fastest, man-eating, sewing machine they had. After a few quick instructions I was left to get on with it. After an hour I complained that they had given me a slow machine ... the whole factory dissolved into laughter – the way I liked it to be!

We worked late into each night. The girls sent out for fish and chips and counted me in – I was flattered. One evening as we sat eating our fish ‘n chips, they asked me about a large order we had just won for making electric heating blankets for a National fleet of Lorries (trucks). The order would go into production in six months time. I explained that the problem I had was that since winning the order the price of the fibre glass cloth had gone through the roof, the profit margin had all but disappeared. At that, old Mollie – who seldom spoke – said, “In the old days we would have made our own cloth on looms. But the men knew best, and got rid of them.” It transpired that her husband – now in his 80s – was a total loom expert.

A week later, at my request, Mollie’s husband came to see me. We were kindred spirits and he was keen to get involved. He didn’t want money; nevertheless, I hired him as a consultant and sent him North. Here he dragged all his pals out of retirement and between them they tracked down a massive old fashioned loom in an old disused factory. They rebuilt it and we got it down to our factory. There are many stories in this – but that’s for another time.

In short we produced all the blankets on time and at a greatly improved profit much to the pleasure of my 200 strong workforce who all felt part of, what I like to call, “Mollie’s Loom.”

I drew the Swiss Ribbon Loom in pen and ink, for Mollie and her husband, to remind them of the fun we had. I knew he wouldn’t want it ‘Arty-farty’ so I drew it almost as a draughtsman’s Isometric view but with enough of me in it to make it personal.

But here’s the twist....
... Three years ago, under pressure from my granddaughters (who rule my life) I researched my family tree. I knew nothing about them, but to my great surprise – my grandfather was a master-tailor, his father was a master-tailor owning a number of shops ... and so on back to 1710!!
Nature or Nurture?
Posted by Gatepost productions at 13:09 No comments:

My third  granddaughter, Giselle, was very young when she became my best friend. It happened suddenly: a look came across her face that seemed to suggest that she had discovered the meaning of life.
"We're Makers," she announced.
And she was right. It's as if there are only two types of people in the world: those that make things and those that do not.
It seems to Giselle and me that although you can subdivide 'makers' into, artists, chefs, blacksmiths and candlestick makers ... we all make things!
From that moment on, we began to work. or rather to make things, together.
By the time she was 10 - she could saw wood, in a straight line, and had all skills of a project manager.
By the time she was 14 - we wrote plays together and saw them performed on stage.
By the time she was 16 - bad health stopped her education in its tracks.
By the time she was 16 and a little bit - we started home education and I became her tutor.
In six months time, she will be 21 and graduate from university with an Honours Degree in Creative Writing. 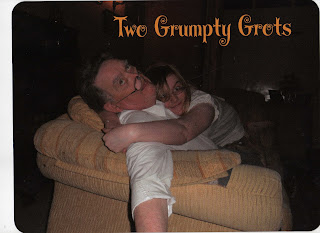 In her words, "When I came to work with you, Grandpa, I was a naive young girl. When you'd finished educating me I was a grumpy old man!"   Woo Hoo!
Posted by Gatepost productions at 02:21 No comments:

It's a Long Time Since I Last Blogged

The last time I blogged was in about 2006, at least it was sometime before the Beijing Olympics 2008. I know that much for sure, because my University asked me to write a blog concerning the Olympics .

"Because you are an EXPERT," they said!

Not an athletic 'expert', you should understand, nor even an academic 'expert'  ... but I was the only Shipwright they had!

My interest was aroused: what the heck did they want an out-of-date shipwright, to write about in the Olympics?

It seemed that there was a project for nine boats to be built: 3 Cornish Luggers in Cornwall, three Arab dhows in Bahrain and three junks in Beijing.

So many governments, big businesses and Universities involved. All 9 boats would come together for the Olympics and then would tour the world, championing Art, Education and Community. Blimey! I thought, big chance here to go with them - I could draw pictures, write and commentate whilst touring with them.

So I wrote and wrote and the blog really went well, pictures from all over the world. I wrote to my pal in Hong Kong asking for pictures of Chinese junks - yes it was me who invented Junk Mail.

Eight months in, and things began going quiet - I kept asking the project liaison people what was going on ... but one by one they slipped out of sight - beneath the waves of apathy - leaving me alone ... up the creek without a paddle, let alone someone who gave a bugger about a lugger ...

It all frizzled out without an explanation... and that was when I blogged off to do other things. I never have time to be bored.


Well! That's got this blog launched!
Posted by Gatepost productions at 09:48 3 comments: