Jamestown - The Daughters of a Nation

You might have noticed that all the earlier settlers, mentioned in my last two postings here, were men or boys. So what of the women?

One of the first English women to arrive and help provide a home life in the rugged Virginia wilderness was young Anne Burras.

Anne was the personal maid of Mistress Forrest who came to Jamestown in 1608 to join her husband. Although the fate of Mistress Forrest remains uncertain, that of Anne Burras is well known as her marriage to carpenter John Laydon, three months after her arrival, became the first Jamestown wedding. While Jamestown fought to become a permanent settlement, Anne and John began a struggle to raise a family of four daughters in the new Virginia wilderness. Certainly, Anne and her family began the stabilization process which would eventually spur the colony's growth.

But then there was, Pocahontas, or Matoaka as she was named at birth! Walt Disney, and many Victorian novelists before him, would have us believe that there was a romance between her and John Smith, the leader of the colonists. Although she saved his life at the risk of her own,  there is no evidence of romance and Smith refers to her in his diary as, '...a child of ten years'. 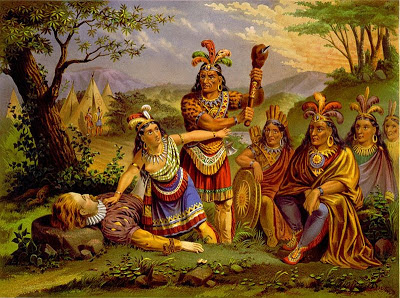 That she visited the settlers most days and brought them supplies that kept them from starvation in the early months shows she was connected to Smith. The reason for this supposition is that when Smith was badly injured in a gunpowder accident, and he was shipped back to England,  she was told that he was dead, and she stopped visiting the colony.

Pocahontas  married John Rolfe, a tobacco grower, on April 5, 1614, and lived for two years on Rolfe's plantation, Varina Farms which was located across the James River from the new community of  Henricus. They had a child, Thomas Rolfe born on January 30, 1615. 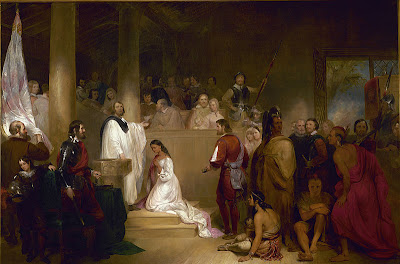 Here is a painting of her baptism, in Virginia, where she was named Rebecca. John stands behind her, whilst her brother sits looking away in disgust! However it brought peace between the 'Indians' and the settlers.

The couple went to England where she was treated as a princess. Pocahontas and Rolfe lived in the suburb of Brentford, Middlesex for some time, as well as at Rolfe's family home at Heacham Hall,  Norfolk.

In early 1617, John Smith met the couple at a social gathering, and later wrote that when Pocahontas saw him, she covered her head and didn't speak for three hours - she had thought him dead. When she did speak she called him 'Father,' and made him call her 'child'.

In March 1617, Rolfe and Pocahontas boarded a ship to return to Virginia; the ship had only gone as far as  Gravsend on the River Thames when Pocahontas became gravely ill. She was taken ashore and died in John Rolfe's arms ...at the age of twenty-two. It was not known what caused her death, but theories range from  smallpox or pneumonia to tuberculosis.

Pat's mother lived in Gravesend, Kent, by the way.

was buried in Saint George's church there, but as that burnt down in 1727, the exact position of her burial is lost.

However, there is a statue there today outside the church of Saint George. 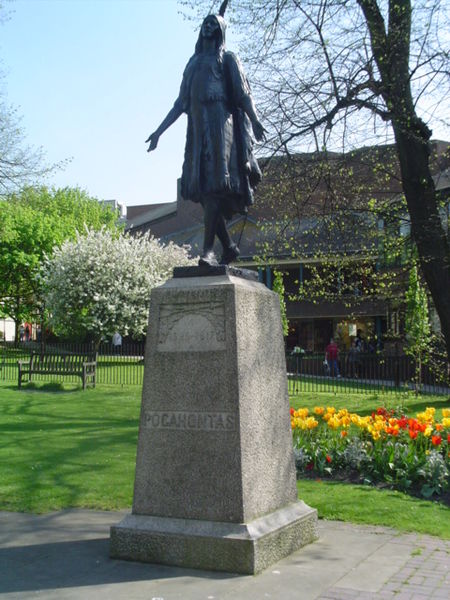 Posted by Gatepost productions at 06:09