My daughter has spent six of the last twelve months in the US with her American boy friend (he's also her boss!). Besides working hard they visited far and wide: from New York to San Francisco and Washington State to Florida. During which time she flirted with hurricane 'Sandy'.

They were so emotionally moved that I decided to make Jamestown, in general, and Susan Constant, in particular, my next project.

For those that are wondering what all this 'emotion' is about, here's the story:

In 1585, Sir Walter Raleigh  founded a settlement on Roanoke Island in a place he named, Virginia (it's now in North Carolina). In the meantime, England found herself at war (nothing new there then!) with the Spanish. Raleigh who was a bit of a pirate, had also introduced tobacco and potatoes to the 'Old World' from the 'New World'. He became a favourite (some say lover) to Elizabeth 1 and played a major part in sailing to fight the Spanish Armada (think Johnny Depp/ Cap'n Jack).

After the war they returned to the New World do discover that all the settlers on Roanoke had vanished; the mystery remains.

The Virginia Company was formed in England, and they hired three (small by today's standards) ships, Susan Constant (120 tons) Godspeed (40 tons) and Discovery (20 tons). In December 1606 they set sail for the country of Virginia, with 144 colonists, under the command of Christopher Newport - an excellent seaman, navigator and leader. They landed at Chesapeake Bay 26 April 1607.

105 colonists from the original 144, all men and boys, were left at the new settlement of Jamestown. The others had either died or wanted to return to England. Among those remaining was John Smith, who was in chains following a 'dispute' on-board!

The ships returned to England in May. Leaving the colonists to get in a mess: 36 of them were 'gentlemen' and the others artisans or servants.  The former refused to do work and argued constantly. John Smith emerged as the leader, but was nearly beaten to death on the command of the powerful 'Indian' chief, Powhattan - only the intervention by the chief's daughter, Pocohantas, saved his life.

Here then is the founding of English-speaking America, thirteen years BEFORE the Mayflower and the Puritan Pilgrim Fathers from Plymouth, Devonshire, England.

It can be seen then, that the little known Susan Constant is one of the most important vessels in modern history,

TECHNOART
For those that don't know me, I am at heart an English Shipwright, (1953 - 1959). For many recent years I have been restricted to building ships on paper only, using technical drawing and then finishing them off artistically (see Bellona). I never showed these drawings as they were for my own amusement. I was persuaded to show them and they are surprisingly popular. I call them techno-art, and it is a challenge, as it uses both sides of my brain at the same time! The beauty is I can draw the ships accurately from any angle or viewpoint I choose.

As there are no original pictures of her, I would have to draw her from the original plans, and in doing I would produce views that are unique ... and that is enough reason, and reward, to draw them!

I have the plans for the Susan Constant and have began work! 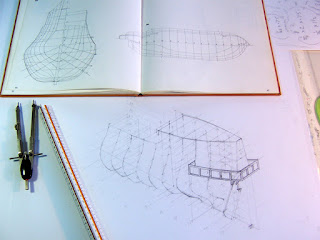 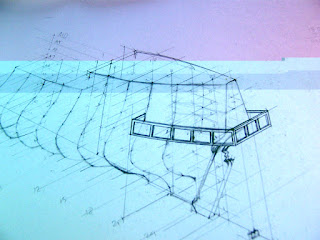 I will keep you updated with Work in Progress and information about the colonists!
Posted by Gatepost productions at 06:49